Meet Patricia. She’s 60, and everything that I aspire to be 30 years from now.

Because while a large majority of 60 year olds wouldn’t even imagine attempting pull-ups, Patricia’s issue isn’t the lack of strength; it’s the fact that her pull-up bar in the backyard has ice on it this time of year.

Yet what’s more impressive than icey pull-ups is Patricia’s entire life story… including her recent second place finish at the 2019 CrossFit Games. As a 60+ CrossFit Masters Athlete and complete badass, she has a great tale to tell. 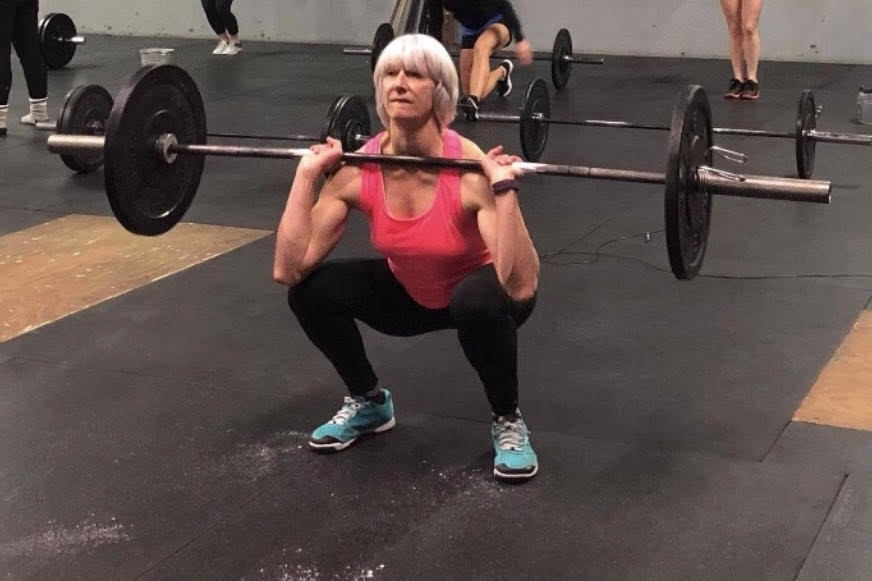 Like so many of us, Patricia competed in a few other forms of fitness before dipping her toes in CrossFit. Unlike many of us, she dominated those too.

I started running in 1974 at the age of 15 and continued for almost 40 years. I always had some weights at home, and I played around with those 3 days a week. I felt even as a teenager that it was wise to balance my running with some resistance work.

In 2006 I bought a road bike and it was love at first ride. My running started to fall off as I embraced cycling. I never competed in anything until 2009, when at the age of 50 when a friend suggested I try a triathlon. I’d never done any swimming so I was in the pool for the first time. In 2010 I was off to Budapest Hungary to compete for Canada at the Triathlon Worlds. I was passionate about triathlon until I entered my first CrossFit box.

Quick recap: At age 50, Patricia went from never swimming before, to quickly mastering the skill and qualifying for Worlds. She didn’t share this with me because of the humble person that she is, but I used the power of Google and found that she finished 33rd at Worlds that year, out of her 57 person age group.

In the meantime, I also did some 24 hour mountain bike racing and a slew of obstacle course races. In 2015, a friend suggested in January that I try the Canadian indoor rowing championships at the end of the month. I did, and won. A judge approached me afterwards and told me I should go to the Worlds in Boston, and that someone should teach me how to row. I went four weeks later and won bronze.

I first started CrossFit in late 2012 after reading about it in Triathlon Magazine. I was hoping to use it to improve my performance in triathlon... but by 2015 I competed in the Triathlon Worlds for my last time. Crossfit had stolen my heart.

So at this point you may be asking yourself…

What Does a 60+ CrossFit Masters Athlete Training Regimen Look Like?

I use Comptrain Masters for my training. While I do belong to a CrossFit box, most of my training is done in my basement as I’m 2 hours away. I also supplement with programs like WODprep. Patricia shares that one of her primary struggles with training has always been gymnastics. Which was somewhat lucky for us... since that’s how she eventually stumbled upon WODprep’s programs.

It took me forever to get any kind of decent kip even for a pull-up. I’ve managed to get through by muscling my way through things - but it’s been a real limiter. It transfers too into OLY lifting as I lose the speed getting under the bar. This is why I turned to WODprep. I need to get movements like a Bar Muscle Up, Ring Muscle Up and Handstand Walk.

(By the way - Patricia is currently enrolled in both Bar Muscle Up Mastery and Handstand Walk Hero - both 8-week courses that she now has lifetime access to, and can now get coaching for at any point.)

A friend suggested WODprep as she’d had great success with it. The programs I’m doing are great but I dropped off in the fall and I’ll get back to them this week. I like the easy access and quick responses of the coaches on the Facebook page.

I need to dial in the kip on my Chest-to-bar too as my form disintegrates quickly, and I revert to fast singles. It just gets tricky this time of year as my pull up bar is on our back deck and I have to chip ice off my bar and deck to use it.

Honestly... I have no idea why I do so well in CrossFit. No one is more surprised than I am. I did the Open in 2014 on a whim and did OK. The first time I actually competed in anything in Crossfit other than the Open was at the Granite Games in 2016.

Let’s talk about 2019. Patricia saw a ton of success as a CrossFit competitor, not only finishing 2nd in her Age Division at the 2019 CrossFit Games, but going on to finish first place for her Age Division on the worldwide leaderboard in the recent 2020 Open.

Major goals, as the kids say.

The highlight for me (for 2019) would be the email inviting me to the Games. I’d come so close for so many years and blown my chance in the AGOQ - that finally making it this year was huge.

Being at the Games was certainly a highlight in my life. I loved the energy, the people and was just in total awe that I had made it there among all these amazing athletes. It was surreal and scary. It was an honour to meet people like Susan Clark and Lynne Knapman who I’d seen for years on the leaderboard. Coach Ben & Patricia hanging out at the 2019 CrossFit Games

I was lucky with the workouts this year. The scariest one for me was the workout with handstand walks, as I knew I’d never even get 5 feet... and I did not have the confidence to risk hurting myself in an attempt.

Speaking of the 2019 CrossFit Games… some of our WODprep team was at the Games this year - including Ben - and across the board we were disappointed in the lack of coverage and general support for the Masters Divisions. I asked Patricia her thoughts on that, and here’s what she had to say:

Unfortunately, Masters are always a hard sell. As a Master I would certainly like to see more exposure to encourage people to embrace the sport and its benefits as they age. But I do recognize that people are drawn to the young individuals. I love what Ben is doing to support us - and the masters community keeps putting pressure on event organizers with some positive results .

I hope this trend continues. I’d like to be able to compete as I get older. It’s unfortunate that CrossFit doesn’t offer more support.

Hopefully this is a situation that WODprep can continue to help change.

Which… by the way… if you’re a Masters Athlete and reading this, one way we are working to improve the lack of Masters support is with WODprep’s exclusive Masters-only online community, WODprep Plus. You can read more about that here!

As 2019 begins to come to a close, Patricia is already looking forward to what’s next on her list for CrossFit endeavors.

I’m off to Wodapaloza in February, and I plan to do the qualifiers for the Granite Games as well. Qualifiers for the Granite Games will be this upcoming Spring. In the meantime, Patricia will be training, with maybe a little bit of travel mixed in.

I’ve been retired for 5.5 years. I’m married with 3 dogs. My other passion is travel - I’m always planning the next trip. I’ve been exploring primarily in Europe but also China, Nepal, Israel, Thailand, Vietnam and Cambodia.

And if you’re wondering what her life looks like outside of the gym, it just doesn’t seem like downtime is her thing.

I love to go for long walks every day with my dogs or friends. I also kayak, cycle, hike, snowshoe and cross country ski.

I’m tired just reading all of that. 🙂

I hope you loved reading Patricia’s story as much as I enjoyed writing it. At 60, it seems she only continues to become a more and more impressive athlete. I’ll be following her fitness journey this upcoming year, as well as keeping tabs on her in our WODprep Plus Facebook Group.

And the next time you’re thinking about skipping a workout because it’s too cold… just remember, Patricia is probably out in that frigid Canadian weather, chipping ice off her pull-up bar and getting ready to attack a workout.

About the Author Ben

The CEO and Head Coach at WODprep, Ben is passionate about helping fitness athletes of all abilities get their competitive edge and learn new skills! He's currently living in Denver, Colorado with his wife and two dogs, and whenever possible the two love to travel and explore new places around the world (and meet new WODprep athletes).

CrossFit Games Athletes 2019: The Best of the Beasts (The Masters)