Shoulder Pain with Bench Press; How to Train Around It 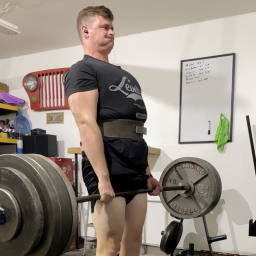 While the bench press isn't something frequently seen in the CrossFit community, it is something that can shoot out of that figurative hopper and something that you should be programming into your sessions! The bench press is a fantastic way to train the horizontal press which encompasses the chest, shoulders, triceps, abs and even the back.

(Not sure how to bench press correctly? My buddy at Ripped Body has an awesome article on it!) Among many of the other barbell movements, the bench press seems to catch a lot of hate from the rehab world regarding its effects on the shoulders or the seemingly inherent danger that is associated with heavy horizontal pressing.

Some of the most common buzzwords that get thrown around by athletes, physical rehab professionals and instagram gurus alike include impingement, stability, mobility, supraspinatus, labrum and narrowing, to name a few.

The general route that these parties go about discussing these things is in a direct cause and effect manner, creating an intimate relationship between the symptoms that a lifter is feeling during the bench press, and structures that they believe to be involved with said symptom!

If you were able to read our “Shoulder Impingement Exercises” article, then you will have a pretty good idea on how this section is going to unfold. If not, take a few minutes to go read it to get acquainted!

The difficult part about making these cause and effect relationships is that it is much more complicated than that! For a vast majority of the population experiencing shoulder pain during bench press, none of these buzzwords are something that they need to be concerned with due to the complex experience of pain.

Yes there can be structures within the joint impinging on each other (although I would rather call it coming close or bumping into one another, because impinging sounds scary), and yes there can be narrowing of the joint space or tears of supraspinatus tendons or labral connective tissue.

There is a big but here, which is that this stuff is actually a very normal and not a causative thing that occurs in a hefty part of the population’s shoulders! The mistake that many people make is that they try to find something within the shoulder to blame, because it's easier than taking a step back to evaluate programming, life stress, expectations and beliefs of the lifter and narratives that they might be seeing their world through, which are all more reasonable things to consider when considering shoulder pain.

So if we aren't looking at the anatomy of the joint to point us in the right direction, then what is our process of intervening on the shoulder pain during the bench press? One of the first things that we need to consider is, what is the context of the pain? At what weight does this pain start to come on, if there is a certain weight that acts as a threshold? At what repetition in a set does it come on? At what range of motion does it happen; during the descent towards the chest or the ascent towards the lockout? Does it occur at a certain time during the week?

All of these things come into question before we make any recommendations or changes. Here is a practical and actionable quick guideline to help decision making! Above: Bench pressing from pins to reduce range of motion. Below: Modifying the bench press by using dumbbells. I would like to touch on just a few big ones and explain why they may not be the entire cause or the thing to focus on while trying to train through and around a painful bench press.

While we can discuss the ability to be efficient regarding the bar path for bench press when considering places to touch on the chest, hand position, back arch or breathing this is not a topic that the bench press lives or dies on.

The context is always a key driving force when considering the form of a movement variation. In this situation the goal of the movement, if the lifter is being judged (competition) or not, the comfort of the lifter (possibly due to shoulder pain) as well as the equipment being used are just a few factors that need to be taken into consideration when making a form recommendation. Let’s take a look at something called the guillotine press. The lifter sets up in a very similar position as if they were to be performing a bench press, until you consider that the bar comes down almost to the front side of the lifter’s neck. While this is not something that most people do while bench pressing, I bring it up as a way to highlight the different movement variations that exist and the spectrum of areas that the shoulders, elbows and bar path can exist in that are still acceptable and not inherently injurious.

Another interesting variation of the bench press is a close grip bench press, which again will shift the shoulder and elbow joints into close but different positions as well as a reverse grip bench press, in which the palms are facing towards the face of the lifter instead of away.

The idea that there is a specific form or hard rules set in place by the universe to govern the horizontal press, or else, is a dangerous way to approach lifting, because depending on the lifter, their belief that there is a wrong way to bench press can end up in symptoms or fear of the movement that are misguided and uncalled for.

I have also read other blogs that state that there should be no one bench pressing with a flat back or without their shoulder blades pinched together, as well as others going on to say that the lift cannot be performed any other way than with the feet flat on the ground and the lifter attempting to bend the bar, whatever that means. 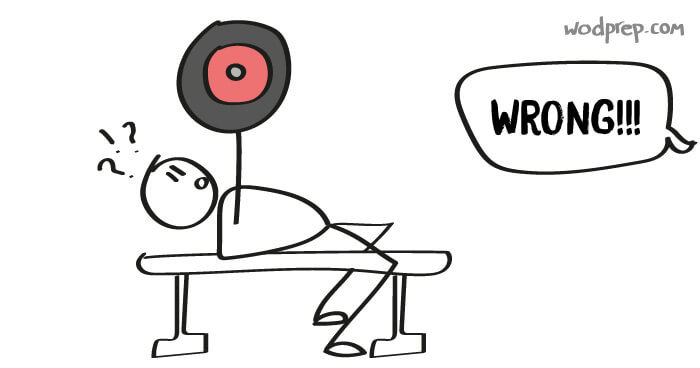 This hard limitation on the ability to move through space puts unnecessary barriers and restrictions on the lifter and again has the opportunity to create an understanding in the lifter that if they don't meet these arbitrary criteria instilled by internet gurus, that they will break their shit. Which is false.

That being said, if you're new to lifting and would like a great starting point, check out this article on how to bench press.

Pain can and will be a part of your training. It is unreasonable to expect to never have perceptions of pain in training, let alone in your life. The goal of an article like this is to attempt to give you the tools it takes to help get your from one end of that experience to the other, and back to training how you want.

When considering pain in the shoulders or other joints involved in the bench press, the first step does not include getting an MRI done or going to your primary care physician. It does include assessing your situation and keeping a level head. After all, strength sports have some of the lowest injury rates in the non-contact competitive sporting world.

After keeping a level head, modifying your training in a way that takes you as little away from your goal movement as possible while still facilitating your progression towards more baseline training is the next step. Once that is finished, slowly building back up to prior to injury training stimulus is the next step.

This can all be a difficult and frustrating series of steps that sometimes take longer than anticipated, but I can assure you that nature and your body are on your side for recovery and that things will improve.

If you find that you are having more difficulty with this series of events than you thought you would or you would care to admit, reach out to our pain and injury team at WODprep for a free consultation call with one of our 1 on 1 coaches to assess your ability to improve with personalized training.

How to Sleep Better – 5 Unconventional Tips