3 Reasons Your CrossFit PR Plateaus, and How To Fix It 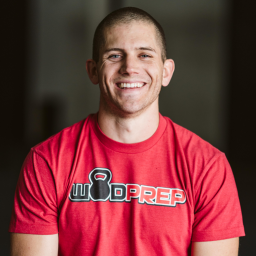 For many beginners, it may seem like you can hit a CrossFit PR on demand. You only go to the gym 3 times per week, but you see significant improvement after almost every WOD.

Next thing you know, 8 months fly by and you start to plateau. Instead of weekly PRs, they become monthly. It doesn’t end there. After a year and a half or so, it takes a good 2-3 months to organically hit a CrossFit PR for any of the major lifts (Clean, Squat, Snatch, Jerk, etc.). Sidenote: What does a PR stand for in CrossFit? Personal Record!

You begin to wonder, “What’s happening?” You’ve been consistent with your 3-5 MetCons at CrossFit per week routine. You’ve been eating fine. Why aren’t all your numbers going up like they used to?

Overcoming a PR CrossFit plateau comes down to one thing: deliberate practice.

If you want to get better at any particular movement or lift, you can’t wait for it to show up in the WOD once every two to three weeks.

Additionally, the occasional 5-minute skill session before the MetCon isn’t getting you closer to Double Unders or Muscle Ups, and the weekly 15-minute strength session doesn’t lend itself well to PR’ing major lifts. You need to dedicate time outside the WOD to learn the skills and acquire the gains you’re looking for.

1) Your Actions Don’t Reflect Your Ambitions

If there’s a movement in the WOD that we haven’t learned yet, we scale down.

The list of scalable options goes on and on.

I’m not suggesting scaling is a bad thing. I can argue it both ways. It depends on who I’m talking to.

When an out-of-shape friend or family member tells me they can’t do CrossFit, I’m the Ambassador of Scaling Down. I’ll say anything to get one more person to drink the Kool-Aid.

I do, however, become stingy about scaling when talking to box mates that are simply complaining. You heard it before. Hell, you might be the one saying it...

Despite the above reactions, after a little digging I find out that they, in fact, want to be able to perform those movements “RX’d” one day - they just can’t yet. To these people, I ask one simple question. “What steps have you taken to learn the movement you’re complaining about?”

Are you waiting to magically acquire the skill? Or do you just love to endlessly bitch and moan without taking any action to solve your own problem?

We scale down because it feels like the smart thing to do during a WOD. But is it really that smart? What if instead of scaling movements, we scaled reps?

How we react to struggle within CrossFit (and life) defines us.

Do you walk away and avoid obstacles altogether? Are you hoping that movement you can’t do won’t be programmed again for another couple of weeks? Or do you come up with a plan to systematically learn that skill and climb out of your CrossFit PR plateau?

2) Your CrossFit Practice is Imperfect (or Non-Existent)

I learned how to do double unders TWO YEARS after starting CrossFit. Once I finally committed to learning them, it took me about 6 weeks to string together 50 unbroken. I only practiced for an hour after every Saturday morning WOD. Or at least until my calves gave out.

Before I hit my breaking point, I committed to never doing a single under again. I combined that with deliberate practice on a weekly basis. After a few sessions, double unders presented themselves to me on a silver platter.

Thrusters, however, were a different story.

Unlike starting at ground zero with double unders, I understood and knew how to do Thrusters. But I couldn’t put more than 7 together without wanting to die (@ only 95lbs). For the longest time, I made excuses. I told myself, “I struggle with thrusters because my legs are weak and shaped like noodles.” Or, “I’m not good at thrusters because my legs are so much longer than my body”. ← WTF?!

Time to get vulnerable: My PR Fran time is 7:30. I don’t need to break the pull-ups. The last time I did Fran, I took a video. The time I spent resting on Thrusters exceeded the time I spent actually doing Thrusters. Pathetic...

In January of 2018, I had enough. After every single WOD, for 4 weeks straight (18 sessions total), I did 5 sets of 5 Thrusters at 95 lbs with a partner. The only rest we had was while the other person worked. It took about 2 minutes to complete each session. On Wednesday, January 31st, 2018, this was the WOD programmed at our box:

Guess who did every single Thruster unbroken (At 25# more than typical Rx weight)? MEEEEEEEE!!!!! This was a CrossFit PR for me - and to be completely honest, I’m not sure if I had broken my Thrusters plateau... or if I just became comfortable with how much they suck. I guess they’re one in the same.

Deliberate practice for 4 weeks, in a singular domain improved my CrossFit performance.

My accountability partner and I were so happy with the results, we continued our post WOD practice. In February we did 3 sets of 20: GHD sit ups & GHD back extensions. In March we did a 6 minute alternating EMOM: 10 Wall Balls & 10 Target Burpees. Each month, we identify a CrossFit weakness in our game and attack it with an easy, repeatable process.

Are you doing the same? If you’re anything like me, you have a lot of room for improvement across a lot of different movements. So one day you might spend some time after class practicing handstand push ups. The next day you might show up early to pick your coaches brain on bar muscle ups. At the end of the week, you feel like your endurance could use some improvement. So you hit the rower for a bit after class and call it “active recovery”.

WRONG. You WILL NOT get better at any single skill if all of them are begging for your attention.

Sift through the noise. You have to identify the highest impact skill that will help you improve your performance overall. Then commit 100% of your practice time (outside the WOD) to developing that one skill and breaking the CrossFit PR plateau. You need to take advantage of muscle memory and subconscious competence to gain confidence in the movement. That only comes from devoting chunks of time to one thing. If you’re lucky, those chunks of time spent practicing one movement might promote a flow state.

CrossFit PR's: The enemy of confidence and momentum is confusion and uncertainty.

Find a simple model that works and work it to the bone. I wish more athletes started thinking this way. They would start feeling less anxiety about their lack of control when it comes to their abilities.

Reminder: As we discussed above, the WOD you attend 3-5 times per week is NOT practice time. That’s break a sweat, burn some calories, enjoy pain cave, have some fun with friends time. Practice, on the other hand, is a lonely, slow, boring, process.

The wording here is semantics. CrossFit goals are good, sure. But there’s a difference between something you can achieve in the next 90 days and an overarching vision that takes years to actualize.

The main difference here is process vs. outcome.

Let’s take an example anyone reading this can identify with: Retirement. Automatically saving 15% of your paycheck every two weeks is a process goal. Retirement is an outcome goal. Retirement in the long-term doesn’t happen unless the short-term process is good enough to achieve the outcome.

Here’s my CrossFit PR action plan for you...

In the comments below, write your short-term process goal that you’ll implement next week. Be specific with when, where, and how you’ll be taking action, as this will make it even more realistic.

If you need help with any of the movements listed below, click through to get our free training guides. WODprep has helped thousands of athletes apply focused, deliberate practice to their training, and we’d love to help you too.

I Got Injured at CrossFit, What Do I Do? (5 Steps)

Read More
I Got Injured at CrossFit, What Do I Do? (5 Steps)

Wearable Tech – The Good, The Bad and The Ugly

Read More
Wearable Tech – The Good, The Bad and The Ugly

Hand Care For CrossFit: Say GoodBye To Rips And Blisters